ELV has produced ALM devices for testing and loading accumulators with unique design and similar wiring.
The predecessors of all the devices below were ALM7000 and ALM7001 with identical front panels. 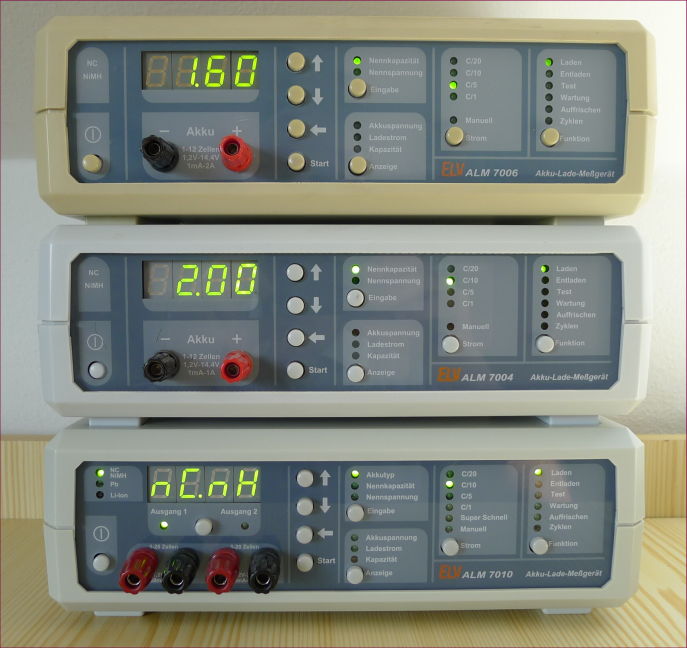 ELV ALM 7006 - fan and temperature control.
After replacement of the power transistor BD249, which was destroyed together with his emitor resistance 0.18Ω after reversed connecting the poles of an accumulator I have also put a new white paste to both temperature sensors SAA965. The first sensor on the trafo is only pressed to the trafo plates, the second one on the cooler is better adjusted.

The potential is multiplexed to the processor and he gives the command to run or stop the fan.
The fan is noisy, therefore I have released a bit the contact of the sensor with the trafo plates.
But my suspicion is, that there went something wrong with the trafo and therefore it produces more heat as before the destruction of BD249.

The comparative measurements below show, that even if the trafo in ALM 7006 has the highest power consumption and heating, it is still acceptable.

ALM 7004, ALM 7006, ALM 7010 transformer measurements of active power(W), apparent power(VA), power factor(cosΦ) and temperature.
There are 3 different dimensioned transformers used in these 3 ALMxxx devices. It was interesting for me to compare them.
The measurements were executed at 238 V on the primary winding.
Not loading - only the indicator and number LEDs are powered with current from secondary winding.
Loading was done with 3.6 V NiMH battery and the loading current was 160 mA.
Temperature was measured at the end of loading.

ELV ALM 7004 - same as ALM 7006 with maximal charging current only 1A.
Bought from second hand, discharging was not working. The reason was a defective operating amplifier IC10D from quadruple OA TLC274. I disconected the output and replaced it with one half of double OA LF412, which was disposable and soldered it directly on the input pins of TLC274, as seen on the picture.

ELV ALM 7004 - another one.
I received it from Nicolas Z. The C22 was exploded, measuring C of it was therefore not relevant. But it was not short cutted. I have replaced it with another one with ESR < 1 Ω. The missing power cord was replaced by another one. Two green LEDs were also replaced, while they didn't work. Load, unload with test option were without any problems. On the pictures there is an arrow pointing to the place of the wrong capacitor. After all I have calibrated it.

Trafo brum in ALM7010
I bought the ALM 7002 kit, because the ALM 7010 was giving a brumming (growling ?) sound of the net frequency. As I know, that the trafos are same in ALM 7010 and ALM 7002 and an ALM 7002 kit was offered on ebay, I bought it. After exchanging the trafo in ALM 7010 with trafo from the ALM7002 kit the situation was the same. I have then tried to damp somehow the main PCB from the bottom box-part with success, but after mounting the upper box-part the brumming sound came again.

I remembered, that in the valve radios the bigger trafos where tightened to the chassis with rubber washers placed between the trafo and the chassis. I din't use rubber, because I hadn't any, but my next step was to take away the distance tubes (see picture) and the tightening screws and to retract only the trafo plates with 4 shorter screws. This brought success.
The distance of the trafo bottom part from PCB is now 1-2mm and the vibrations of the trafo body are not taken over by the medium of the distance tubes to the PCB and from the PCB to the resonating box. 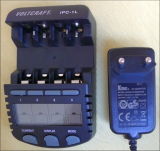 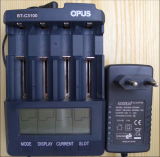 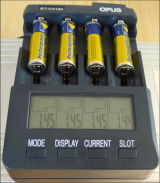 Quick-test (Ri in mΩ) for loaded accu (may be used also for alkaline batteries).  If Ri > 250 mΩ, then the load current may be lower as the chosen current.
Contact failure may cause additionally 30 mΩ and even more. Better contact pressure brings better value.
For instance a new full loaded 18650 Li-ion showed with Quick Test 120 mΩ, whereas with ELV RIM1000 measured 80 mΩ.

An internal fan works, if temperature is over 40°C. Over 60°C the loader stops loading. If temperature falls under 40°C, loading continues.

Charging with 10s current and 2s pause, voltage is measured continuously.
The difference between pause and load voltage depends on internal resistance Ri of the accumulator.
Discharging works without pause, voltage is measured under load.
The front panel is connected to the board by a connector. RS232 connector behind enables graphing on PC.
Current and charge voltage on the display is OK. But the discharge voltage is 0.2 V less as measured by a voltmeter.
For such case calibration of charge and discharge current and voltage is possible pushing both CLEAR and ENTER.
Here is the description of this device in german. 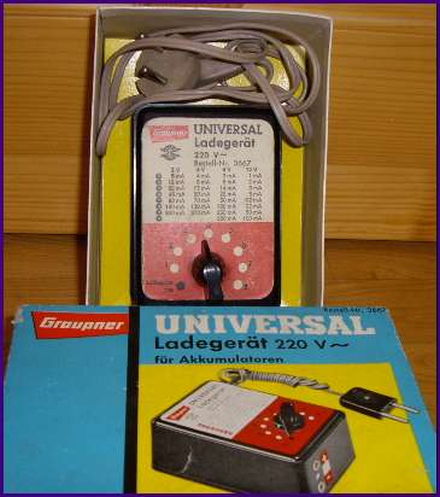 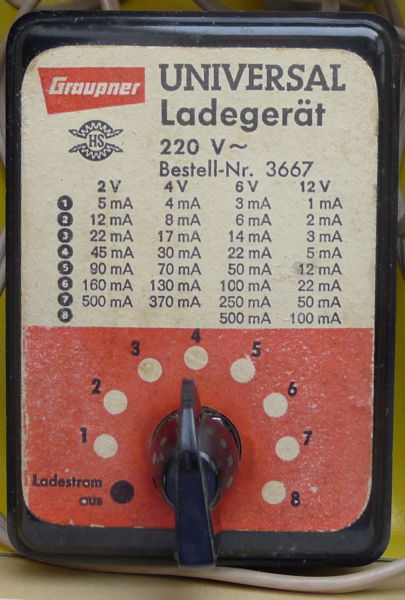 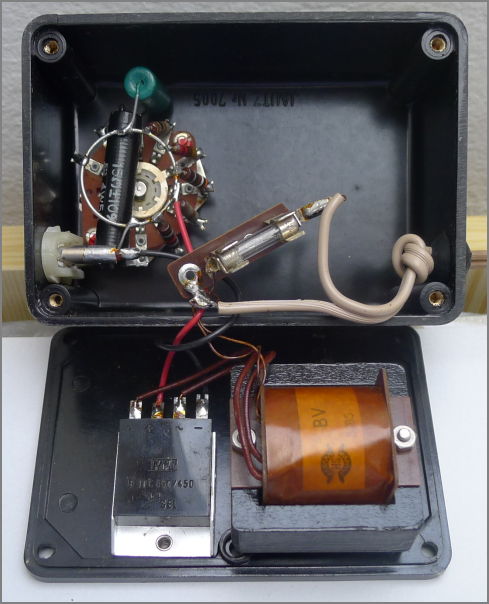 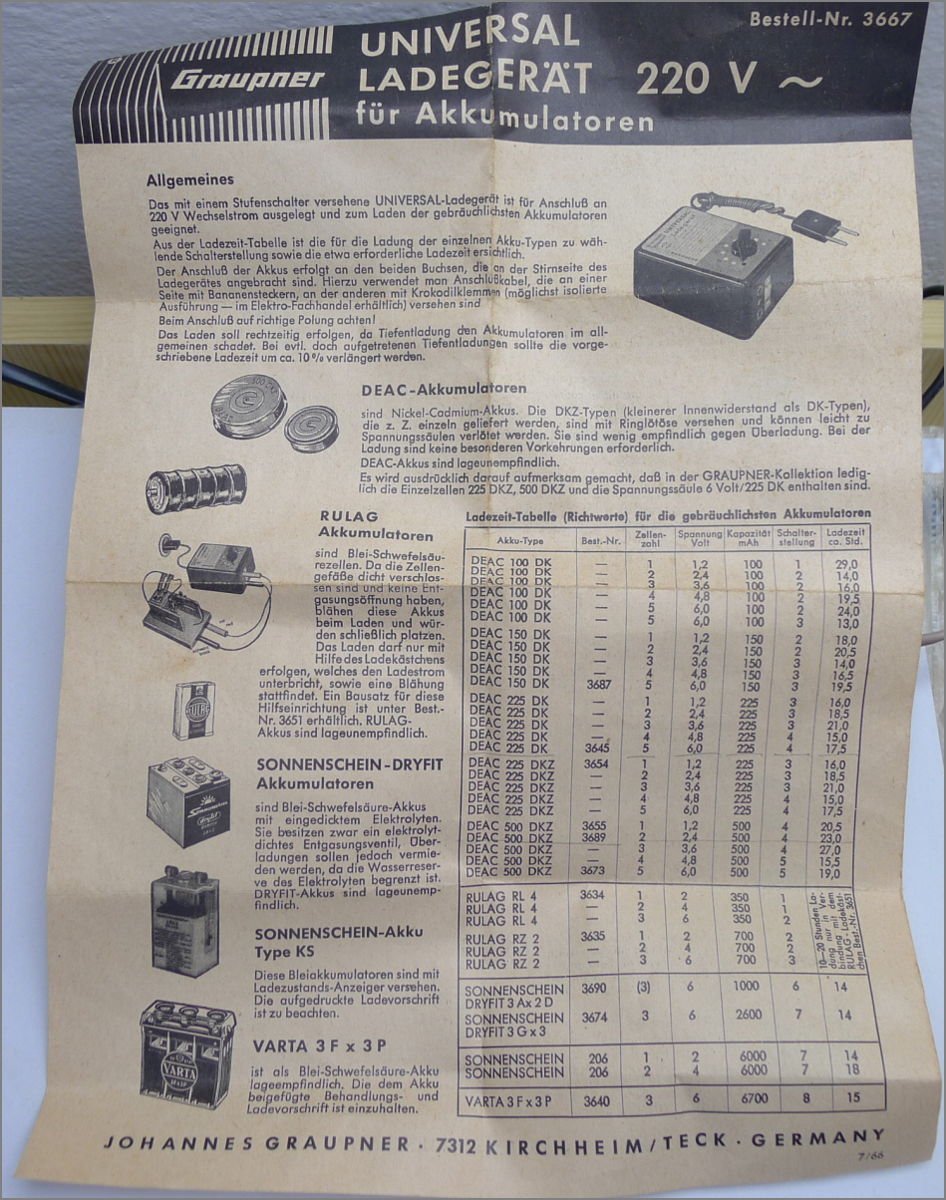 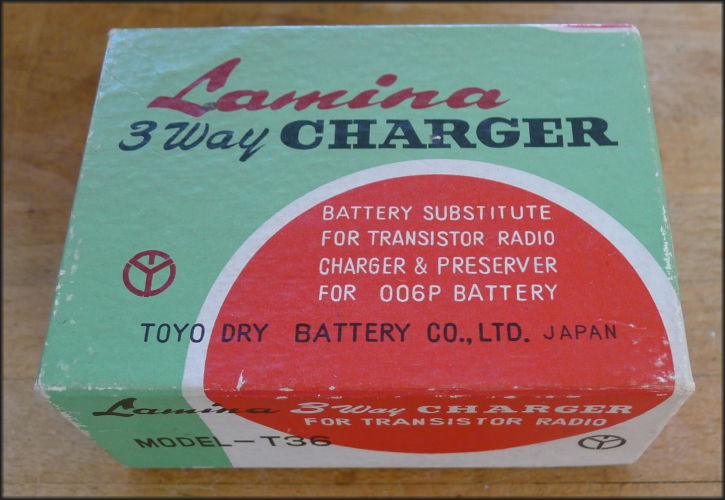 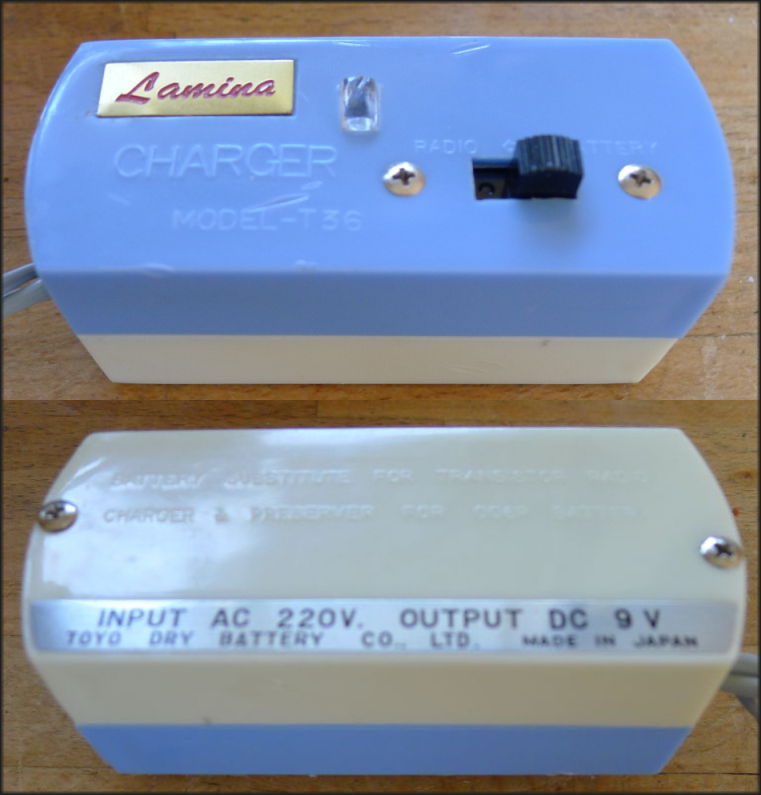 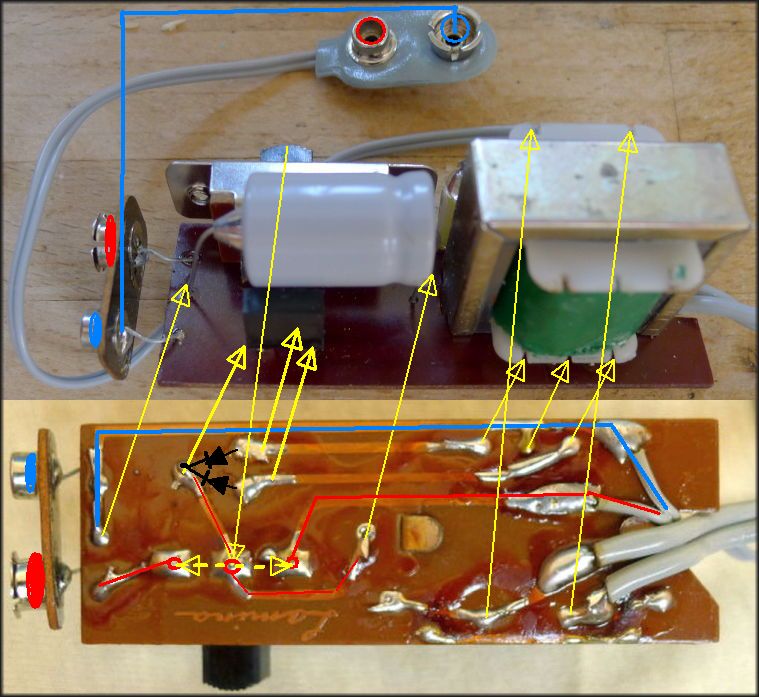 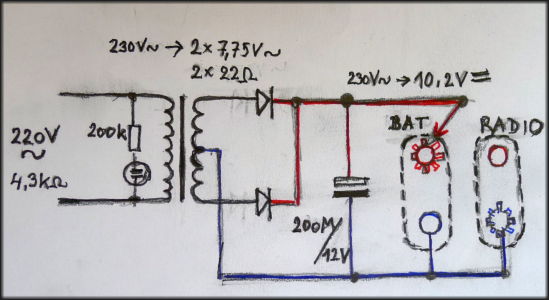 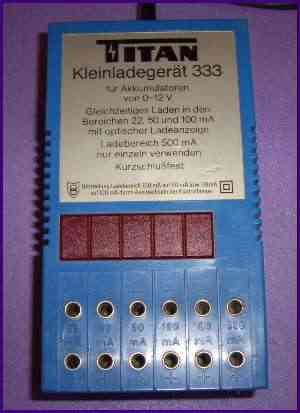 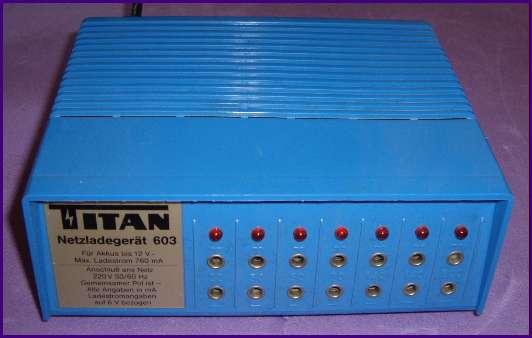 Ri measured with RIM1000 - see below and current pulses of 2A. 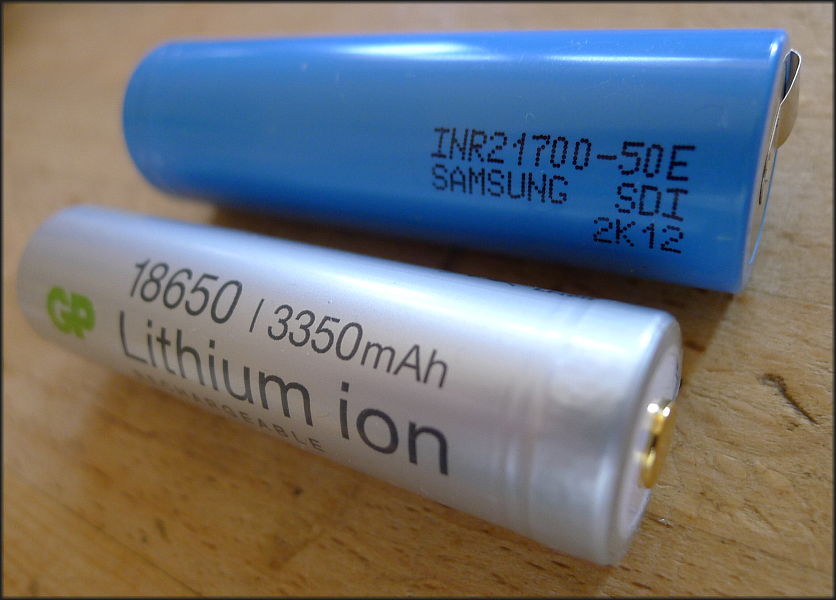 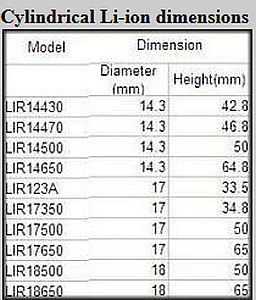 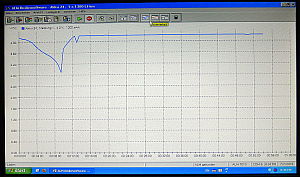 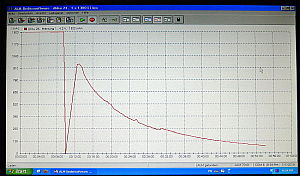 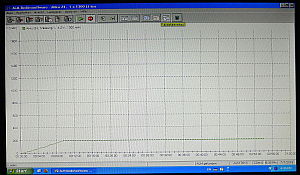 Unloading of this used battery cell with current C/1 1300 mA lasted only ca 9 minutes because of reduced capacity of this cell.
Loading should work firstly with given constant current 1300mA, which even wasn't achieved, because of arriving limited voltage.
Achieving cca 4.22 V works loading at this constant voltage, where current goes gradually down and by cca 80 mA loading finishes.

With battery element protection. It exists a similar little device without battery protection - only for loading purposes withut OUT contacts to device taking current from the battery.

The loading current comes from a 4,5-6 V power supply through the micro USB or the contacts on both sides of it. The maximal loading current is set by the Rprog or R3 wih 1.2 kΩ on 1 A at the constant current phase. It is possible to change it changing this resistor value. The maximum voltage 4,2 V is controled by TP4506. If the battery voltage is under cca 2,9 V, the charging works with a current cca 100 mA only. The full current comes, if the element exceeds 2,9 V.

The battery protection contains aditionally IC DW01A and 8205, which unplug the battery element from the battery using device if voltage of the element falls under 2,4 V.


Usage of 4x 18650 accu pack in a garden trimmer grass-cutter: Accus are built inside and loaded with an adapter.

Motor with 14.4 V at free run without load only with the knife holder takes about 5 A, with 2.0 V 0.6 A.
The rounded knife holder is possible to unscrew as a female screw. The motor axle is ended by a male screw.

Measuring of accus and batteries

ELV RIM1000 or Voltcraft RIM1000
Internal resistance - Ri measurement device for accumulators, also for non rechargeables.
It was sold also as a kit, therefore a very good documentation exists in the web.
It works with short (5μs impuls) load 0.5A - 10A settable. My device has ca 1 µA consumpotion in off state.
Therefore it is better to take the battery off, when for a longer time not used. 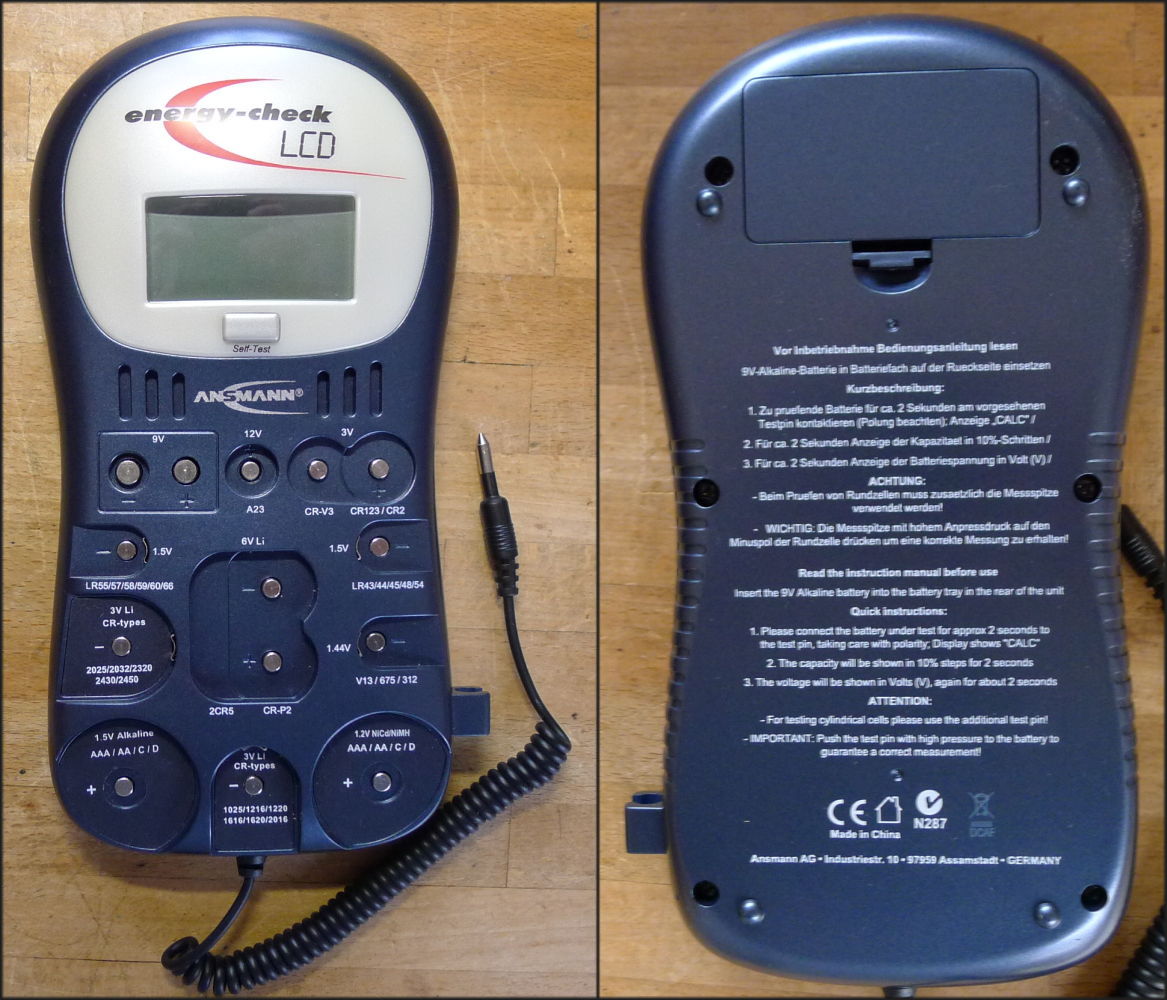 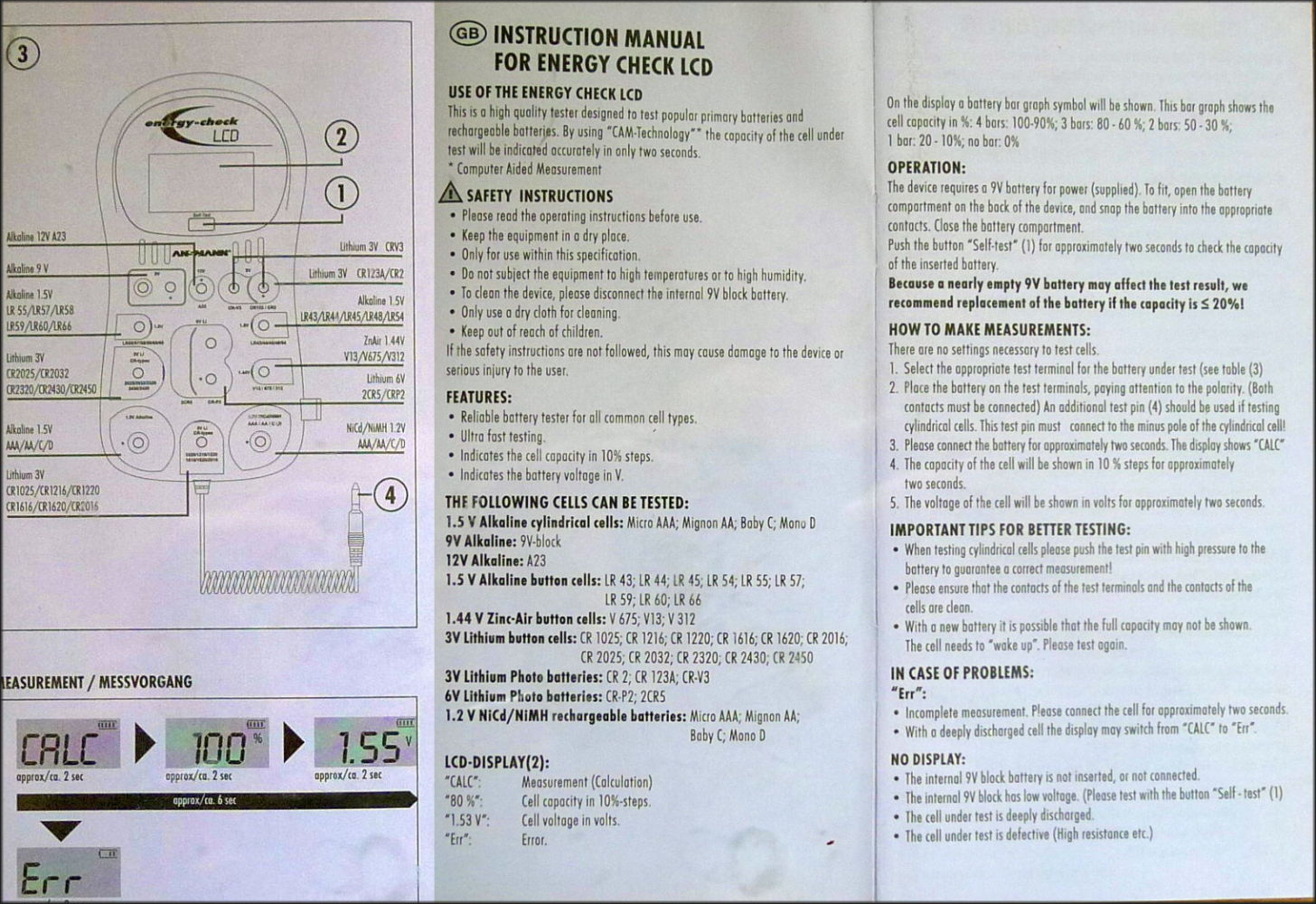 Ansmann Energy Check LCD
It is usable for battery and also for AA, AAA, C, D NiCd/NiMH accumulator.
The result is rest capacity in tenths of % and voltage under battery type specific load in duration of ca 2s.


First I have measured the strength of electromagnetic field. the current values are not relevant
current values because there is no DC or AC current, there is a short, load dependant current pulse. 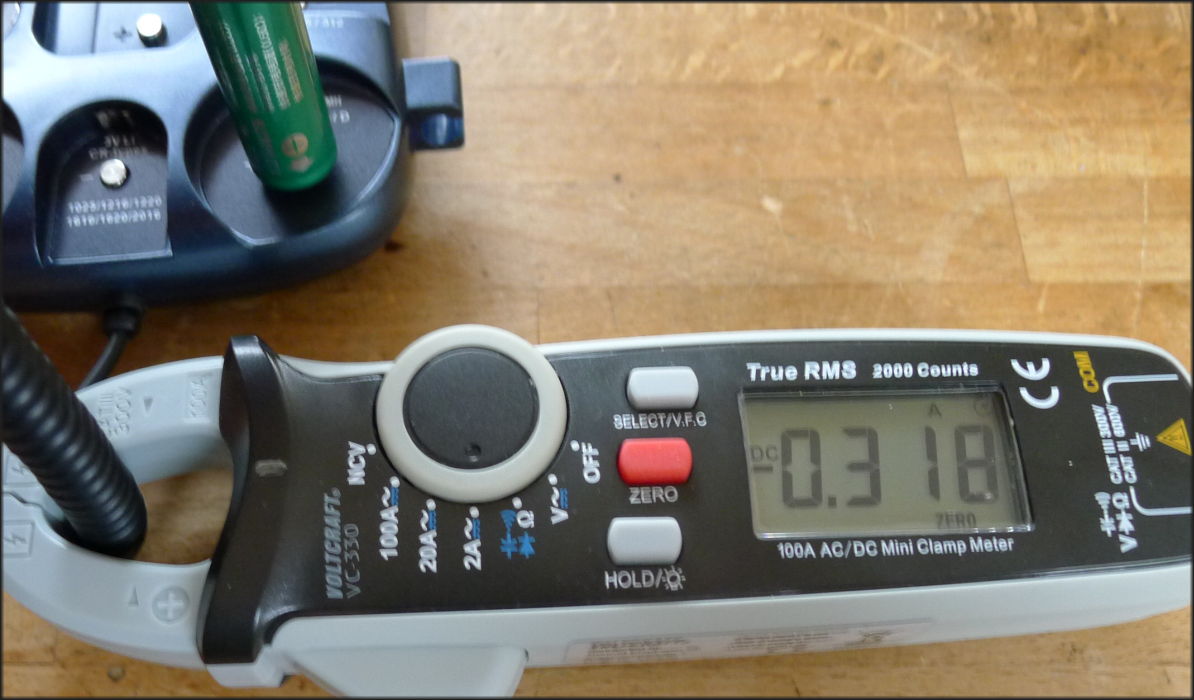 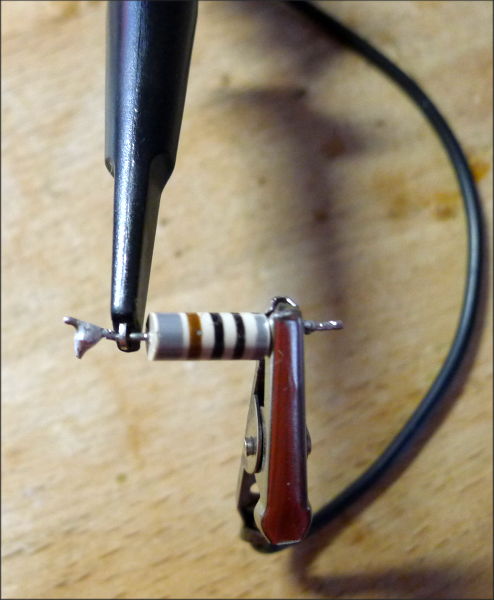 After it I have used a 1 Ω resistance in series with the tested element and a 100 MHz scope
in DC mode, time basis 100 ns per segment, connected at the resistor ends.
It has shown a short 100 ns pulse.

On the 9V battery it was 2 V pulse and wirh the AA penlike element it was a 15 V pulse.
It means these short pulses where current pulses of 2 A and 15 A.
Therefore it is important to ensure a good contact between the battery and Ansmann device.
So it works like a inner resistance measurement device.

The frequency is about 36 kHz, peak voltage of the sinus wave measured on the coil is about 300 V.
Parameters of transistor 13001 and of bridge rectifier TB6S.


Inside of the secondary unit: